There are many locations throughout The Accused Architect. Here, a few of the most frequented locations are profiled, complete with concept art.

First up is BPW Architects, where Ken Knoll works. The firm has about 40 employees and is located in Southfield, Michigan. This is where a great deal of action takes place in The Accused Architect, including the scene that starts off the novel, where Edison tells Ken about the dead body he found and tried to move on the Flamingo Shores project.

Concept art for BPW Architects, where Ken Knoll and the rest of the characters are employed.

Another great location in The Accused Architect is Ray’s Coney, where Ken Knoll and Edison eat several times in the novel, in-between their amateur sleuthing efforts to solve the mystery of the missing body. You won’t find anything resembling nutritious food at Ray’s Coney. It’s also a hole-in-the-wall along Twelve Mile, nestled in-between a comic book shop and a science fiction memorabilia store. But Ken doesn’t care about the nutrition or the look of the place when he sets out to eat at Ray’s Coney, and neither does Edison:

“We didn’t come for the decor. Their chili is marvelous, thick and flavorful. They make a terrific spinach pie, too, warmed up in the oven leaving crisp edges, unlike the sad microwave versions offered by most restaurants these days. Nuking the pie just makes the phyllo dough tough and leathery. I ordered the spinach pie with a vanilla shake. Edison got his usual fare. One day, Ray will name it ‘the Edison combo’: two coney dogs with extra mustard, chili cheese fries, and a large root beer.” -Christian Belz, The Accused Architect, page 139

For more about food in The Accused Architect, check out the food page. 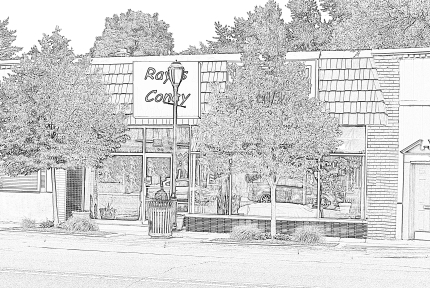 Concept art for Ray’s Coney, the hole-in-the-wall restaurant Edison and Ken Knoll frequent in-between their attempts to solve the mysterious disappearance of the dead body at Flamingo Shores.